One of the greatest challenges any educational leader can model for her staff is her own vulnerabilities – that is publicly sharing what one doesn't know. This willingness to not only share in the struggle and confusion that comes with learning, but to actually foist it into the spotlight at a staff meeting takes a great deal of courage.

Karen Barker took such a tenuous leadership proposition and turned it into an opportunity to lead - in her first year as principal no less.

Barker is the leader of three schools within the Dickinson Elementary School building in Lake Washington School District just north of Seattle, Washington. In addition to the elementary school there is a pre-school and a community school. At the time of her appointment four years ago, Barker was the fourth leader in three years when she moved from the teaching ranks into the principal's office. She found a fractured school culture.

"I was eager to build a really healthy school," she said. "And success is rooted in the teachers. They're the ones who are behind initiatives and who run with them. Change cannot be driven by the principal only."

What Barker found, in addition to low morale were district initiatives left half-finished or yet to be started. The school had had little professional development in two years. Where other administrators may have been daunted by the task of leading, Barker seized the opportunity.

"There was no way I was going to pull off any of the initiatives with the whole staff, without letting them know what I didn't know," she recalls.

Instead of hiding behind the pretense that, as the principal, she should be all knowing, Barker asked staff to help her learn about the math curriculum that had stayed in boxes for two years or the literacy assessments that had yet to been used. If Barker didn't have the answers, she sought out those who did.

"I was in a unique position to have to model learning. I was going to have to (learn) to move the school forward."

The challenge actually gave Barker confidence. "Building relationships and school culture is my strength. I've had instructional limitations and challenges from the beginning. I wasn't going to fool anyone." 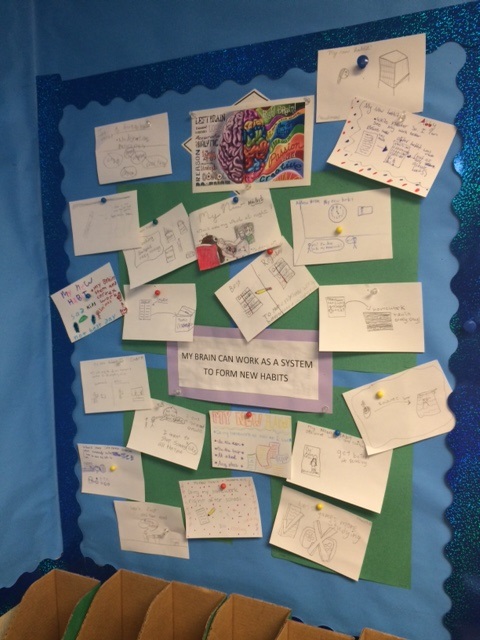 elementary and secondary principals in the Redmond Learning Community, one of the four regions of the Lake Washington School District. Attending with the principals were teacher leaders from each school. She saw a natural fit between growth mindset practices and what she was trying to accomplish in her schools.

Since Barker's arrival Dickinson has followed the Virtues Project. It was a program that her staff and parents researched before diving in. It is an explicitly taught program with a new virtue taught every month.

Each month brings student-led assemblies focusing on the virtue, whether it's self-discipline, kindness, respect, etc., giving students ownership in demonstrating and modeling each virtue. In addition teachers use a common language, lessons and stories to concentrate on the virtue as well as identifying the character trait in their students when they see it.

"We did not want a program in a box," Barker says. "We wanted something we could train all staff intentionally and implement together."

It is with this same enthusiasm Barker and her teachers are incorporating growth mindset strategies into the existing virtues programing. While a virtue like perseverance lends itself nicely to a growth mindset approach to learning, Dickinson teachers are being just as intentional and explicit in teaching effective mindset language and providing activities to students on grit.

The results are being seen in the hallways on bulletin boards, grit/growth mindset-themed teacher costumes, training for all staff, and a planned parent information night.

This school wide approach is already showing benefits. Barker hears teachers using growth mindset framing to begin lessons and units. Examples include, "This is going to be difficult and so exciting," and "You're going to be firing new neurons while we learn this."

Dickinson draws its student population from diverse neighborhoods; those that are economically well-off to families qualifying for free lunch for their children. Despite this variability Barker sees gains in grit and growth mindset approaches for all of her students. "There are needs on both ends."

The driven, high economic and goal-orientated households can tend to focus on performance scales and not the process of learning according to Barker. It is not uncommon for students from these backgrounds to hold a greater fixed mindset leading to learned helplessness.

Among the anecdotal evidence Barker is hearing from her staff is that they utilize a growth mindset approach to a child's learning challenges, whether it be an English language learner, a special education student or a child that never had preschool. Instead of hearing complaints about these students, Barker hears discussions like a teacher who recently said, "I'm having trouble teaching reading to some of my ELL students because I'm noticing they're not pronouncing some phonic blends correctly. I need help." This is a big change from earlier comments that labeled students as not able because of fixed abilities.

Barker says it's really the teachers' attitudes toward limitations that are the proof in the growth mindset pudding. As she listens to her staff she wonders: Is she hearing the red light of "those students can't" or growth mindset language of finding new strategies to help students persevere and learn?

Have YOU noticed school culture changes among adults as you have implemented growth mindset research and strategies? We would love to hear your stories or comments below!