When I first became a teacher, I spent a lot of time at first thinking about how I would support students when they struggled. My mind was automatically programmed to think that whatever I'd be teaching, it was going to be difficult for some students, and I needed to be ready to offer an available scaffold to them. And if that scaffold did not work, I needed to have something else ready for them so that they would keep working in my class. My mindset was focused on helping students learn and although my intentions were pure, looking back on this, I'm feeling exhausted!

I was exhausted because when a student got stuck, I planned exactly what they needed to do to get unstuck with some kind of work or activity that I had thoughtfully created with my thinking. Then the next time a student needed help, what were students to do? Wait for me to give them something to write down so they would have the answer- an answer that I thought up. I quickly realized that learning 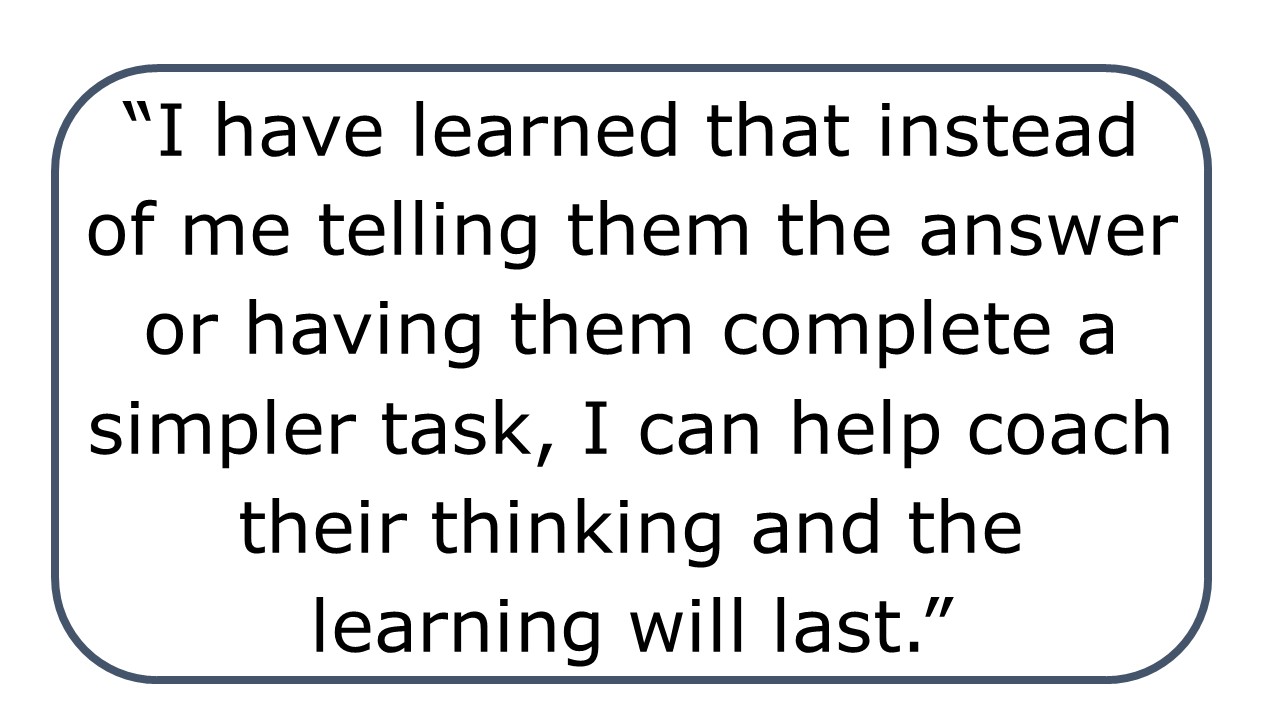 was not occurring. I was "spoon-feeding" for lack of a better word, no better yet, my students were becoming compliant learners who depended on me to think of everything that truly they should be proving their thinking on. The way I was doing things was not going to last. My instructional mindset was built on the notion that I was solely responsible for student learning. When I really examined what I was trying to do as an English teacher, I realized that my students needed to be able to think. I wanted them to become thinkers. No matter what they decided to do with their lives, they still needed to be able to think.

Reflecting on my own experience as a student, I thought about how much I loved certain authors like Maya Angelou, Paul Fleishmann, and Walter Dean Myers. I did not love them because a teacher told me to love their works and what to think about them. I loved them because when I read their books, I was taught to analyze and evaluate why they wrote the way they did. Why was I able to see myself in I Know Why the Caged Bird Sings? Because I had the opportunity to research Maya Angelou in a cooperative learning project with other students and pretend to be her in an interview-style forum. I had to "become her" in front of my peers and answer the way she would answer. In the middle of the interview, I could not stop and ask my teacher what I should say. The group and I spent weeks, devouring Angelou's works, watching interviews, critically discussing and debating what she meant by this or that line from different texts. While my group prepared, what was my teacher doing? He was coaching us along saying that we needed to decide the important points to showcase about Angelou. The decision was ours. We had the power to decide our learning.

After reflecting on this, I realized that I could become more effective as a teacher if I allowed students to decide where to go next with their work. I could help them become more self-directed and independent with the work they did for class. I could ask more divergent questions versus questions that led them to the "right" answer. During the writing process, I could conference more effectively with students by asking them to set the purpose for the conference based off the last formative feedback they were given. I could teach them how to look for quality work by examining exemplars. I could teach them to monitor their progress on the standards and make goals to reach the next level or make progress. I could teach them how to metacognitively monitor their own thinking processes and get unstuck while working in my class.

I learned to stop during instruction and think aloud what we were doing to model what metacognition sounds like. Students learned to paraphrase information in the lesson making it mean something to them from translating it into their own words. It was ok for me to decrease the "spoon-fed" support I'd been offering to students previously and start mediating their thinking process by doing more listening instead of talking in my own classroom! It is amazing what a little wait time will do for students anticipating the opportunity to share what they think about something that has been asked.

Although this was a tough practice for me to begin during that first year, it has become my automatic nature as a teacher. It has been rewarding to watch students figure out their next steps on a project or listen to Socratic discussions that are student led. Instead of over-scaffolding, I had to change my mindset about the way I viewed student thinking. I learned that it was ok for me not to have all the answers or a backup activity when students struggled with something. If I gave them the opportunity to think, they would surely make progress in my class. I have learned that instead of me telling them the answer or having them complete a simpler task, I can help coach their thinking and the learning will last.

How has a growth mindset changed your instructional practices?  Comment below or email us at editor@mindsetworks.com.

Cryslynn Billingsley teaches students in St. Louis, Missouri and is a certified cognitive coach and administrator. After finishing her Educational Specialist this fall, she will pursue a doctorate in Teaching and Learning Processes.