Growth mindset for a more empathetic and collaborative world

Emerging growth mindset research is generating new insights about human relationships.   To what extent do we believe that human characteristics, other than abilities –such as being kind, joyful, smart, courageous or cooperative– are fixed versus changeable? Can each of those qualities be developed, or are they innate? Our answers deeply affect our perceptions and behaviors, which in turn affect the quality of our relationships and our collaboration with others.

Research on mindset about human qualities

Most people think of growth mindset as the understanding that we can develop our abilities. While that is accurate, the broader definition of a growth mindset is the understanding that human qualities can change.  Abilities are a particular type of human quality.  Research on this broader definition of growth mindset has led to new insights about its effects on human behavior and relationships.  It has shown that viewing personal attributes as changeable leads people to make less rigid social judgments and behave in more amicable and collaborative ways.

In the 1990s, Cynthia A. Erdley and Carol Dweck (1993) found that when children observe other children, those who believe that personality is fixed make more rigid, generalized and long-term social judgments than those who believe that personality can change. That is, children in fixed mindsets about human qualities get strong first impressions that are resistant to change, even upon encountering contradictory evidence. These children also show less empathy and recommend harsher punishments for their peers. Similarly, Chiu and colleagues (1997) found that people who believe in fixed attributes use trait-relevant information to make stronger future behavioral predictions, and they also make stronger trait inferences from behavior.  This is true of people in both the United States (a more individualistic culture) and Hong Kong (a more collectivistic culture).

More recently, David Yeager and colleagues (2011) discovered that when high school students experience wrong-doing, such as when they are excluded in a social situation, they react in more prosocial ways if they have previously learned that personal qualities can change. They feel less shame and hatred and engage less in revenge. They feel more agency. They are more likely to work to change the situation by sharing their experiences and views and by asking questions to engage in dialogue and negotiation.

Karina Schumann, Jamil Zaki and Carol Dweck (2014) showed that when people view empathy as a quality that can be developed rather than as something some people have and others do not, they tend to behave more empathetically when empathy is challenging. In other words, our view of the malleability of empathy does not appear to make much of a difference when empathy is easy, such as when we observe people who look like us and hold similar views to ours. But when others look, think or behave differently than we do, a belief that empathy can be developed leads us to behave more empathetically. In a world with significant polarization, conflict and warfare, this research suggests that we need not only more empathy but also the view that a person’s ability to empathize can grow.

Halperin, Goldenberg, and colleagues (2016, 2011) found that exposing Israelis and Palestinians to the idea that groups can change, without mentioning any specific group, leads them to adopt more positive attitudes toward one another, to become more willing to compromise in the interest of peace, and to collaborate more effectively.  They come to see others’ views and behaviors more as a product of their experiences, situations, and motivations, all of which can change, rather than as something fixed in their person.  They become more open to considering where others are coming from, and with a greater understanding, they can more effectively negotiate, influence, and collaborate on problem-solving tasks. 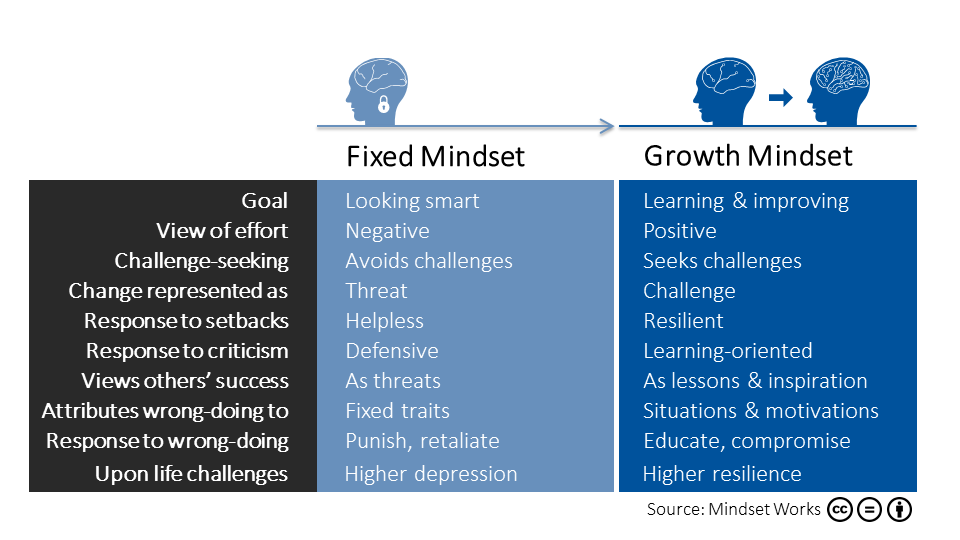 Much of the polarization in today’s world may be rooted in fixed mindsets. When people believe in fixed traits, they look to assign traits to other people rather than consider the psychology behind others’ behaviors. Once they assign a trait or quality to someone, they hold onto it.This can happen to people of any religion and across the political spectrum. When it happens to us, we tend to make blanket judgments and use negative labels to describe others rather than ask questions to try to better understand what has led others to their current beliefs. We make assumptions, distance ourselves and then interpret the ambiguous images we see from a distance as confirmation of our preconceived notions.

In today’s world, we not only need more empathy, kindness, collaboration and other positive qualities but also the view that those qualities can be developed within each person. Yet, if we examine our behaviors, we can notice that we often act in ways that foster fixed mindsets.

How often do we strive for flawless performance, hiding our mistakes and deficiencies, instead of taking on challenges that would stretch our abilities, acknowledging our opportunities to improve? The implicit message to ourselves and to others is that we most value being capable and knowing rather than becoming more capable and continuing to develop ourselves.

When others are feeling down or make a mistake, how often do we try to bring them back up by reassuring them of how smart, talented or special they are rather than focusing on what we can all do to learn, change and improve?

How often do we think and talk about people in another political party as evil, stupid or hypocritical? Our tendency to make blanket judgments and use negative labels prompts us and others to believe there is nothing we can learn from their perspectives and that there is no point in engaging in dialogue toward mutual influence.

We can begin our growth mindset journey by reflecting on when we’re in a fixed mindset and what effect it has on us. Such reflection increases our understanding of mindsets as well as our self-awareness, which empowers us to later influence our own beliefs and those of others. Through working on our own transformation, we realize that people can change. We develop a growth mindset, and in the process, we become more capable of helping others do the same.

Eduardo Briceño cofounded Mindset Works with Carol Dweck, Lisa Blackwell and others to help people and organizations develop learning-oriented cultures and systems. As CEO of Mindset Works, Eduardo has spoken on the growth mindset at numerous conferences worldwide.  Check out his recent TED talk: How to get better at the things we care about or follow him on Twitter at @ebriceno8.

This is an adapted article originally published in SGI’s Common Threads.

So happy for people like Shaunti Feldhahn and her 30-Day Kindness Challenge to help people cultivate more kindness.
0 Cancel Reply
[quote]Improving the world requires all of us to strengthen our understanding that all people and groups can change and to continuously take action to effect such change. We must shift from thinking that the world needs more kind people and fewer unkind people to thinking that we must help all people cultivate more kindness, empathy, curiosity, competence and any other quality that will contribute to greater understanding, collaboration and positive relationships.[/quote] So happy for people like [url=http://shaunti.com/]Shaunti Feldhahn[/url] and her [url=http://www.jointhekindnesschallenge.com/]30-Day Kindness Challenge[/url] to help people cultivate more kindness.
Cancel Update Comment

Articles
Why Is It That Some People Don’t Tend to Change?
Articles
What’s Your Mindset? Who’d want just one?
View all related posts